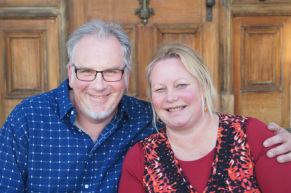 Ray Bigden & Jules Haydock
Ray Bigden and Jules Haydock purchased this house in 2014 and are continuing to run it as a Boutique Bed and Breakfast. Ray, originally from London, has lived in New Zealand since 1992, and has had many years experience in customer service. Jules, who was born in Nelson has worked in H.R. for many years, and returned to Nelson in 2008. It's just fantastic living in the Nelson area with all it has to offer, and we are both passionate about delivering a high standard of customer service.
We offer you a warm welcome into our gorgeous old home.

A Brief History of Our House

Everett's Drapery in Bridge Street Circa 1910
This beautiful character villa built in 1893 by John Scott was originally home to Albert Everett and his wife, Ada Gordon, where they raised their 12 children. Albert's father, Edward, served a term in 1876 as Nelson's third Mayor, and "Everett Bros Drapery" was established in 1864 by Albert and his brother Charles, in the Victoria House building at 68 Bridge Street. This was later the site for the H & J Smith department store. 29 Collingwood Street remained the Everett's family home until 1920. The house changed hands many times after that. Old plans suggest that it was converted into two separate flats in the 1940's, and was also run as a cheap boarding house for some years.
The house was re-furbished and re-opened in 1981 as California House Inn by Carol Glen and Al Cohen, as a California style bed and breakfast inn, which it remained as for ten years. The house has changed hands six times since then, remaining as bed and breakfast or guest house accommodation for the most part, but returning to a family home at least once. A new host accommodation wing was added in 1996, giving the house eight bedrooms.
google-site-verification: google5dd184eea1b588af.html